Can I take turmeric and anticoagulants?

Dr Miriam Ferrer, Head of Product Development at FutureYou, looks at evidence for the compatibility of curcumin with anticoagulants and antiplatelet agents. 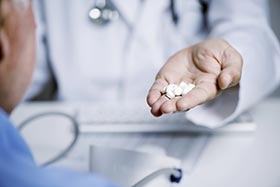 anticoagulants and curcumin, the active ingredient in TURMERIC+.

Anticoagulants and antiplatelet agents are frequently used for the prevention and treatment of a wide range of cardiovascular and cerebrovascular diseases.

Warfarin (commercialised as Coumarin®) is the most widely prescribed anticoagulant in the UK. Anticoagulants and antiplatelet agents are more likely than any other medication to interact with herbal supplements and medicines.

Theoretically, curcumin may increase the effects of anticoagulants and antiplatelet agents – possibly increasing the risk of bleeding – because in vitro and animal studies have shown that curcumin can have an anticoagulant effect[1]. We will look at the results of a human study shortly.

In vitro studies are performed on cells in a controlled laboratory environment. They are the first studies to be performed when researching the effect of any compound, as they provide information on the cellular mechanism of action. Nevertheless, they have some limitations, as they extrapolate of the effects from a few cells to cover an entire organism.

In vivo studies are performed using animals, usually mice or rats. They help us to understand how the compound behaves in a whole organism. They also provide the initial points of toxicity (what is the maximum dose that can be given without any adverse effect) and pharmacokinetics (how the drug distributes itself in the blood and the organs). The main limitations of in vivo animal studies are that mice and rats have a quite different metabolism to humans, and it is not a simple extrapolation.

In a recent study, Hu and collaborators[2] evaluated the interaction of the curcumin-phytosome formulation used in TURMERIC+ with antiplatelet and anticoagulant agents.

Patients that had been taking antiplatelet agents (acetylsalicylic acid [Cardioaspirin® 100mg/day], ticlopidine [Ticlid® 250mg/day], or clopidogrel [Plavix®]) for at least two years were given three tablets of curcumin-phytosome per day, for 10 days.

The BT (in vivo bleeding time), defined as the time taken for spontaneous bleeding to stop after an incision is made into the skin, was evaluated before and after 10 days of curcumin supplementation. Normal BTs are usually between two and ten minutes, but can be longer than 30 minutes in patients with severe platelet defects.

Researchers found no significant differences on the average BT value before or after 10-day supplementation with Cardioaspirin®(BT = 5.54 ± 1.11 vs BT = 5.51 ± 1.21). Similar results were observed in the Ticlid® and the Plavix® groups.

Patients using warfarin (Coumadin®) or dabigratan (Pradaxa®) for previous venous thrombosis were given two tablets of curcumin-phytosome per day, for 10 days. The anticoagulants were administered to keep the INR (International Normalized Ratio) at a constant level of around 3. The INR test is a standardised method used to monitor how well blood coagulates. In healthy people, an INR ≤ 1.0 is considered normal. An INR: 2.0 – 3.0 is generally an effective therapeutic range for people taking warfarin or other anticoagulants.

Nevertheless, you can be confident that there is data from patients that supports the conclusion that curcumin and warfarin can be taken together.

Talk to your doctor

If you are taking prescription medication and think you would like to try a supplement, we recommend that you talk to your doctor or pharmacist first. Your doctor knows your medical history and will have up-to-date knowledge about any known drug interactions or reported adverse reactions.