A report by the Cochrane Library, looking into the effect of omega-3 on heart health, has resulted in misleading headlines. 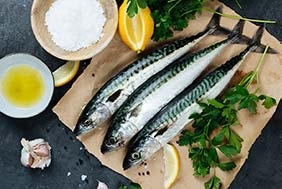 Omega-3 is a fatty acid which is essential for the proper functioning of the body. The three types of omega-3 fatty acid required by humans are eicosapentaenoic acid (EPA), docosahexaenoic acid (DHA) and α-linolenic acid (ALA) – a less potent form found in plants. EPA and DHA are found in nuts, seeds and marine oils, including cod liver oil and krill oil.

As omega-3 can only be obtained from our diet, the NHS recommends eating two portions of fish a week. Food supplements containing omega-3 are also a popular option – in fact, a quarter of supplement users in the UK are taking a form of omega-3. We know that it has benefits for the brain, eyes, joints and immune system.

Another claim about omega-3, supported by the European Food Safety Authority (EFSA), is that it contributes to normal heart function. However, this has been called into question in a recent report from the Cochrane Library.

This report examined 79 trials studying the effects of taking an omega-3 supplement, involving more than 110,000 people in Europe, Australia, North America and Asia. Based on the results of 25 of these trials, which were judged to be particularly reliable, the Cochrane report authors reached the following conclusions:

However, the studies used to formulate these conclusions are not sufficient to back up some of the statements made by the press following the Cochrane Report – especially headlines like ‘Omega-3 pills and fish oil ‘useless’ for preventing disease’ (The Times) and ‘Fish oil supplements for a healthy heart “nonsense”’ (BBC News).

There are several problems with the media’s approach on this:

The NHS recommends that people eat two portions of fish a week, one of which should be an oily fish such as sardines or mackerel, as a way of getting enough omega-3 – but many people are getting only half of the recommended 400mg of omega-3 per day. This fact, combined with the various issues identified above, mean that omega-3 supplements still have a major part to play in improving overall health and wellbeing.