Most of us probably haven’t heard of NAD. And if you have, the chances are it’s not been since our school days. But it’s time to recap on why our biology teachers paid so much attention to this small compound.

NAD is a molecule that is found in all living cells (yes, also in bacteria!) and that is essential for many important cellular functions.

In the cells, NAD can be found in two forms’: NAD+ and NADH. They are still the same molecule, NAD, but they have different chemical properties and functions. NAD+ (the ‘+’ refers to the chemical state) is the oxidised form, and NADH is the reduced form. The ability to switch between these forms is what makes NAD such an important molecule.

What does NAD do?

NAD works as a coenzyme. A coenzyme is a molecule, quite similar to a vitamin, and that helps enzymes to do their jobs. In case you’ve forgotten, enzymes are proteins that act as catalysts and that, to put it in simple terms, are responsible for most of the biological functions that your body does, from digestion to making energy.

Coenzymes can help enzymes in several different ways, which depend on the enzyme and on the coenzyme. Some coenzymes, such as NAD or Co-Enzyme Q10, are involved in the transfer of electrons (negatively charged particles) from one molecule to another.

Why is NAD+ important?

As we have seen above, NAD+ is an important molecule that helps to keep our bodies functioning through its central role in generating energy.

But also, it is much more than that. NAD+ is involved in many processes that take place in our cells. As we age, our bodies use more NAD+, but our capacity for making it diminishes. NAD+ decline is a major factor in the progression of many age-related diseases, such as inflammation, neurodegenerative disorders, cardiovascular problems or cancer. 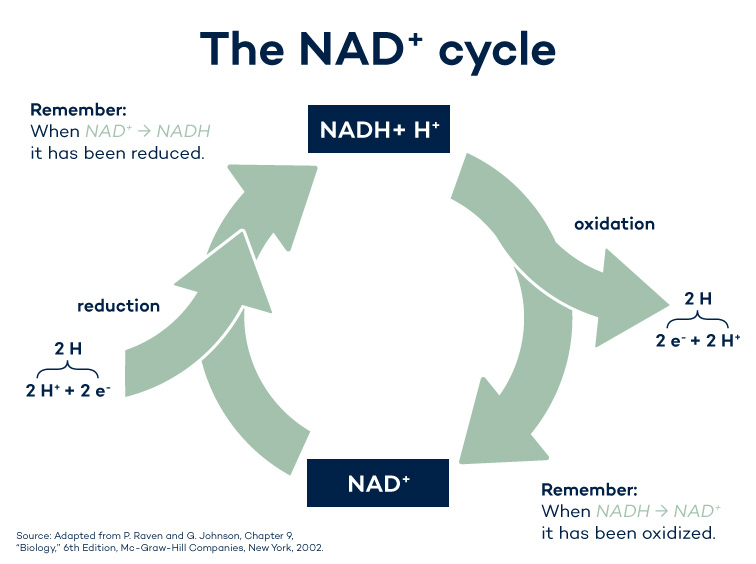 What are the sources of NAD+?

NAD+ is one of the most common metabolites in the body, and our bodies are very good at maintaining its levels. Every cell in our bodies makes NAD+. To make NAD+, our cells need the building blocks (or ‘precursors), the materials that will be used to form NAD+2.

The amino acid tryptophan, which is found in meats like turkey, can be transformed into NAD+. However, that is not a very efficient way, and it’s only really significant when our bodies have tryptophan to spare, since it’s used in many other pathways. Plus many of us only eat turkey about once a year!

Vitamin B3 is also a good precursor of NAD+. Although we generally talk about vitamin B3 as one molecule, there are several known forms of vitamin B3: nicotinamide (NAM), nicotinic acid (NA) and nicotinamide riboside (NR). We get vitamin B3 from multiple foods, such as legumes, nuts, whole-grain cereals, fish or milk3.

Through multiple chemical reactions, our bodies are able to transform those vitamin B3 types into NAD+.

Other than from the food, we can get additional vitamin B3 from food supplements. Nicotinic acid (NA) is one of the main forms of vitamin B3. NA is converted into NAD+ in the body. Supplementation with NA can increase NAD+ production, but at high doses (>20mg/day), it can cause skin flushing in sensitive individuals 4.

Nicotinamide (NAM) is another vitamin B3 form commonly found in supplements, and it is also converted into NAD+ in the body. NAM doesn’t cause flushing so it might be a preferred option in supplements. However, it is unclear whether NAM can have a positive or negative effect on sirtuin activity, so from a cellular function point of view might not be as helpful as we think 5.

Nicotinamide Riboside (NR) is perhaps a lesser known form of vitamin B3, as it was discovered much later. NR supplementation has been shown to increase NAD+ levels, but without having any negative effect on sirtuin activity 6.

NMN (Nicotinamide MonoNucleotide) is another molecule that can be used to make NAD+. NMN is not a form of vitamin B3, but it is also naturally abundant in some foods like broccoli, cabbage or avocado 7.

There are very few human studies done with NMN supplementation, so it is not very clear yet how helpful it can be for increasing NAD+ levels in the body.

Although not easy to buy in the UK, there are some NAD+ supplements in the market. You would think these are a good source of NAD+, since you are taking the molecule directly. However, taking NAD+ directly won’t make any difference to your NAD+ body levels. NAD+ degrades quickly outside the cell, as well as being transformed into NADH, which is not really what you are after 8.

How can I improve my NAD+ levels?

It is very easy to make simple lifestyle changes that you can make in order to help your body to maintain NAD+ levels for longer.

Calorie restriction has been shown among other benefits, to help with lowering oxidative stress, a major component of ageing. High oxidative stress leads to high NAD+ consumption [ref]. Fasting has also been shown to improve NAD+ levels in the body. We are not talking here about dieting, we are talking about avoiding overindulgence, and eating more food than our bodies need, so just eat sensibly and eat what you really need.

Moderate exercise has also been shown to increase NAD+ levels 9. However, over-exercising can have the opposite effect.

Moreover, supplementation with NAD+ precursors such as NR can also help to increase NAD+ levels10.

The Science behind NAD

Like most animals and plants, our bodies prefer to use the mitochondria (the powerhouse of the cell) to generate ATP (Adenosine 5’-Triphosphate), our main source of cellular energy.

In the mitochondria, a type of enzymes called oxidoreductase are involved in a series of chain of reactions that involves the transfers of electrons between molecules. These chemical reactions are called redox reactions, and they are essential for the function of metabolism. At the end of the chain, an enzyme called ATP synthase will use the electron transfer ability of NAD+/NADH to generate the energy in the form of ATP.

As a cofactor, NAD+ is involved in other cellular roles as well. Other types of enzymes that use NAD+ as a cofactor are the sirtuins and PARPs (Poly (ADP-Ribose) Polymerase).

Sirtuins are another type of enzymes, called deacetylases, which are involved in a variety of functions, including:

So far, several sirtuins have been described in mammals (SIRT1-7), and they all need NAD+ to function11.

Researchers became very interested in sirtuins when an experiment showed that in the budding yeast (Saccharomyces cerevisiae), increasing the amount of Sir2 (the sirtuin enzyme in yeasts) could extend their lifespan by as much as 70% 12.

Similar results have been obtained in other animals such as the roundworm (C. elegans), the fruit fly (Drosophila melanogaster) or mice. Of course humans are way more complicated than those other organisms, and although many more studies are still needed, activation of sirtuins through lifestyle changes can have some benefits on improving human lifespan 13.

The activity of sirtuins is regulated at multiple levels and by many factors, but as they need NAD+ to function, not having enough NAD+ could affect their function in the long run.

PARPs (Poly (ADP-Ribose) Polymerase) are probably less known than sirtuins. PARPs are a family of enzymes whose job is to transfer the molecule ADP-ribose into other proteins. PARP proteins have a key role in DNA repair and in cell death. These two processes are very important in the body, in particular for cancer prevention 14.