Colin keeps on sailing with Cambridge 'Tomato pill'
When Colin Grundon, 76, had an angioplasty to treat a narrowed artery, the last thing he expected was a compliment from the doctor – but that's exactly what happened.

'I had a triple heart bypass in 1990 with a top heart surgeon,' says Colin, who has now been taking Ateronon Heart+ for several years. 'He used an artery for two of the grafts and a very small length of vein for the third graft.

'Three years ago I was getting angina, so a cardiologist at St Thomas's Hospital in London did an angioplasty on that vein. His comment was that he found my arteries were very flexible and clean for a man of my age, making the work on my vein so much easier, plus my blood flow was very good.' 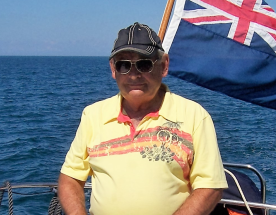 Colin Grundy
Colin still sails his boat after a triple heart bypass
'Having research conducted at such a well-known institution immediately gave me real confidence'.
A keen sailor with an active lifestyle, Colin has been concerned about his heart since undergoing the triple bypass in 1990. He first learned about Ateronon Heart+, the leading supplement in our Heart range, in 2013 when he read a front page article in the newspaper about lycopene. This compound is found in the skin of tomatoes and other fruits and vegetables, which is credited with many of the health benefits of a Mediterranean diet.

The article described Ateronon Heart+ and explained that it has been subject to £12 million of research. The supplement contains LactoLycopene, a uniquely bioavailable lycopene formulation1, combined with thiamin and selenium to support a healthy heart2.

The article immediately grabbed Colin's attention, even though he had never taken any supplements before. What appealed to him most about Ateronon Heart+ was the research behind it, particularly a study conducted at Cambridge University Hospitals NHS Foundation Trust (Addenbrooke's)3.

'It was a first for me, but having research conducted at such a well-known institution immediately gave me real confidence,' he says.

Colin was careful about possible interactions between the capsule and his medication, especially the statins he took for his blood pressure. However, his cardiologist confirmed that the one-a-day supplement could be taken alongside statins and was fully supportive of him doing so – the cardiologist even started taking the product himself.

Six years after starting to take Ateronon Heart+, Colin says he has never looked back.

'I am exceptionally well and still sailing. I feel as though I have much more energy and independence to do things that in the past I had asked others to do for me – like clean and polish a 52ft boat,' he explains.

Colin now advises his family and friends to take the patented product. 'My son-in-law is an armed policeman in the Metropolitan Police. At 51 he is now taking Ateronon.'

'My wife Joanna has been on Ateronon now for four years and recently had a heart ultrasound scan. On receiving the results her doctor said that at her age, she had never seen a scan like hers where valves and ventricles were all marked as normal! We are both now 76 but feel 50!'