Cannibidiol, also known as CBD, has become very popular thanks to press coverage about its positive effects, but many people are still unsure about this compound because it is extracted from the cannabis plant. We take a look at the facts and research around CBD, and reveal the questions you should be asking when choosing a supplement for yourself.

Cannabidiol (CBD) is a compound found in the seeds, stalks and flowers of various species of hemp plants. The plants are also known by their latin name, cannabis.

This annual, flowering herb has been cultivated for thousands of years thanks to its practical, medicinal and religious applications, and also for its intoxicating qualities.1

Due to a long history of selective breeding, different strains of the plant have become useful for specific applications.

Sativa L. strains, often referred to as ‘hemp’, have historically been used to create rope, paper and clothing. Governments in the early modern period saw hemp as vital, because it was used to produce naval supplies for sailing ships – in fact, the English word ‘canvas’ may originate from Latin cannapaceus, ‘made from hemp’. George Washington, the first president of the United States, grew hemp for this purpose on his estate at Mount Vernon. 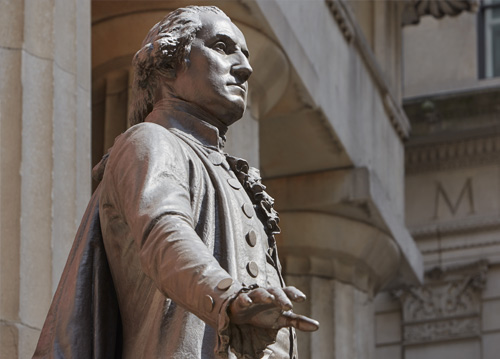 Hemp can be used as a construction material; a non-toxic component for oil-based products like paint, cosmetics, and plastics; and it can even be eaten as a source of essential fatty acids.

The better-known species of cannabis, indica L., contains concentrated tetrahydrocannabinol (THC), which is responsible for the intoxicating ‘high’, and low concentrations of cannabidiol (CBD). Some varieties have been bred and grown to contain higher concentrations of THC, which increases the high.

For this reason, CBD oil is extracted from the more useful hemp plant – which has low levels of THC and very high levels of CBD.

How does CBD affect the body?

Although interest in CBD has grown exponentially in the last few years, its mechanism of action is not clear yet, and more research is needed to have a full picture of its benefits. It is believed to have anxiolytic, antipsychotic, antiemetic and anti-inflammatory properties.

The human body contains something called the endocannabinoid system. Receptors for this system interact with particular compounds, producing an effect. They are located all over the body but concentrated in the brain, nervous system, peripheral organs and tissues.2 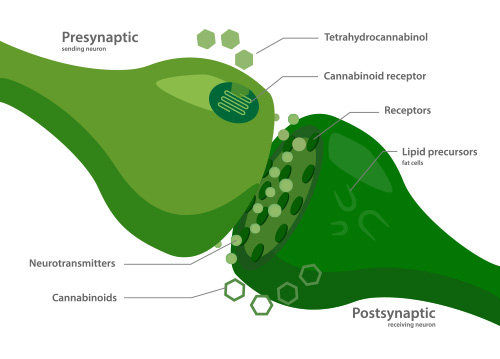 Chemical compounds that act on these receptors are called cannabinoids. The body naturally produces its own cannabinoids but plants can also produce their own versions too - cannabidiol (CBD) from the hemp plant is one of these ‘phytocannabinoids’.

The endocannabinoid system is involved in the homeostasis (equilibrium) of the body. More research is required into this system, but is seems to be involved in regulating a range of physiological and cognitive processes.3, 4, 5, 6, 7, 8, 9, 10

When the plant cannabinoid CBD acts on the endocannabinoid system’s receptors it can produce a number of different effects, as listed below. However, note that many of the references here are to animal studies and in vitro studies and that further research in humans is needed.

How long do the effects of CBD last?

There is no definitive answer to this question. As with many nutritional supplements the strength and duration of any effects will depend on multiple factors, including your metabolism and chosen delivery method (e.g. whether you take CBD in a capsule of as an oral spray). 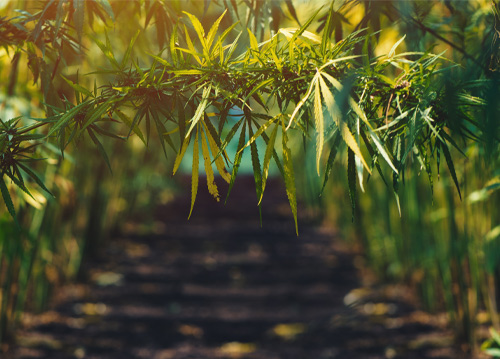 You should follow the directions for use provided with your chosen CBD supplement – this should give you a good idea of how much to take, and how often.

Many people in the past have worried about whether CBD is legal because of the connection to THC and banned substances. This concern is understandable.

Fortunately, there is a clear answer: CBD oil is completely legal in the UK according to the Psychoactive Substances Act 2016.23

Previously, the UK government would ban particular drugs that they believed to be harmful. However, the rise of ‘legal highs’ made this approach obsolete - research chemists would slightly modify the banned substances so that it had a similar effect but was technically allowed for sale.

What does this mean for cannabis-derived products?

The government has stipulated that to sell CBD products, the manufacturer must ensure that the THC content of the product is lower than 0.2%. This means that the supplement will have no psychoactive effects.

When shopping for a CBD supplement, customers should check that the supplier is following this rule.

Outside the UK, the legality of CBD varies from country to country. If you live abroad, you should consult local sources to find out the current status of CBD and whether your supplier complies with current legislation. You should not bring a CBD product with you when travelling overseas without first checking its legal status in the destination country.

Will CBD get me high?

The first thing to know is that CBD is completely safe and legal.

The CBD oil that is sold by reputable companies is extracted from the leaves of hemp plants grown by EU-certified suppliers. By law, it must contain less than 0.2% THC which ensures that it is not intoxicating and will not cause a ‘high’.

Does CBD have side effects?

CBD oil originates from a variety of the hemp plant, so it is only natural that people are concerned about potential side effects.

As noted above, CBD itself does not have any psychoactive effects, and by law CBD supplements are not permitted to contain more than 0.2% of the THC that causes a ‘high’.

We know that CBD is also well tolerated by humans even in high doses (1,500mg per day), and is non-toxic. It is regarded as safe for human consumption.24, 25

Research into CBD is ongoing, but scientific studies have shown that it can cause the following low-risk side effects in a small percentage of people. However, these side effects were reported in clinical studies where people were administered pharmacological amounts of CBD (300-400mg per day). By comparison, supplements containing CBD include far smaller amounts; for example, 10mg, which is only a thirtieth of the amount administered in these studies. In one study conducted with 10mg of cannabidiol, no side effects were reported.

When you begin taking a CBD supplement you might choose to start with a reduced amount to see whether you experience any of these side effects.

Although there is evidence for the side effects listed above, larger and more rigorous studies are needed.

While anecdotal accounts about taking CBD oil are easy to find online, people researching the supplement should be aware that many reviews come from countries where CBD is less regulated than the UK. It is important to choose a high-quality CBD supplement from a reputable source.

If you do experience a side effect, stop taking your CBD supplement and consult your doctor before resuming. You should not use CBD while pregnant or breastfeeding and, as with any supplement, you should always tell your doctor what you are taking.

How do you take CBD?

Once CBD is processed from hemp leaves, it is usually mixed with something else such as hemp oil – this makes it easier for your body to absorb the CBD, and also contains useful omega-3 and omega-6 fatty acids. 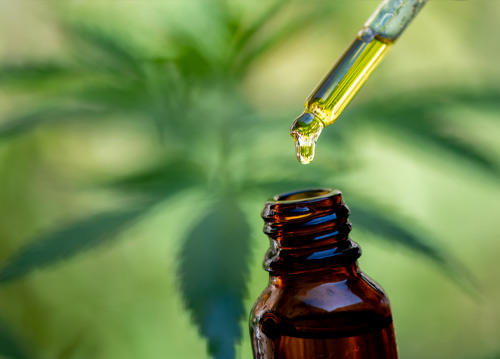 Some people like to take their supplements in capsule form, others prefer gummies or drops. Cannabidiol is now available in several different delivery methods:

Each delivery method has different advantages: for example, capsules ensure you get the same dose every time, while sprays or droppers may take effect more quickly. All of them are legal in the UK as long as they use a pure source of CBD. CBD products are currently sold as food supplements. The government has also permitted very strong versions on prescription for people with certain medical conditions. 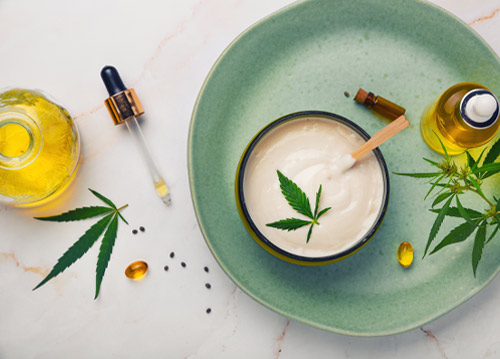 The amount of CBD delivered by each format or supplement will vary, so be sure to check you are happy with the strength before making your purchase. The CBD may also be combined with a variety of other ingredients; for example, hemp seed oil is sometimes used to improve absorption by the body.

With formats such as drops, you should always think about taste. A lot of people find it unpalatable, and it is often heavily flavoured as a result.

Most importantly, you should make sure that you are buying a purified CBD product from a reputable company. Every product must contain less than 0.2% THC by law, which ensures that it is not intoxicating – your supplier should indicate that they follow this stipulation and be happy to show you evidence their product has been tested to guarantee this.

Cannabidiol (CBD) is extracted from strains of the cannabis plant that contain low quantities of the compounds that give people a ‘high’. Supplements containing the compound are legal and strictly regulated, but you should check to make sure that your chosen supplier is a reputable company that follows the rules.

CBD is becoming very popular thanks to press coverage, and although more research is needed we do know that it has anti-inflammatory and antioxidant qualities. People are using CBD for pain, anxiety and sleep, while higher pharmaceutical doses are being prescribed for serious conditions that cause seizures.