According to the NHS, problems with sperm are now the number one cause of male infertility. In this article we look at the function of sperm, why they are so important and what men can do to improve sperm health and the chances of conception.

Sperm (from the Greek sperma: seed) are reproductive cells that are produced in the testicles of male humans and animals.

Sperm were first discovered in the 17th century by Antonie van Leeuwenhoek, the father of microbiology, who observed them through a microscope and called them animalcules (little animals).

A healthy sperm resembles a tadpole, with an egg-shaped head and long tail which helps the sperm to ‘swim’ and to penetrate a female sex cell called an egg (ovum) during fertilization. The head of the sperm contains:

A normal male human ejaculation consists of between 2 and 5 millilitres of semen; this represents more than 39 million sperm, suspended in seminal fluid produced by the prostate gland.

During sex these sperm are introduced to the female reproductive system, where one of them may fuse with a female reproductive cell (the ovum) during fertilization. A new organism (a zygote that will grow into an embryo) will develop from the combined chromosomes of the male and female cells, sharing the characteristics of both the mother and father.

How do we define sperm health?

There are three especially important factors that determine the likelihood of conception from a man’s sperm:

When a couple has trouble conceiving, doctors offer a standard semen analysis that tests for all three factors.

According to these figures a normal ejaculation will contain at least 39 million sperm with a concentration of more than 15 million sperm per millilitre: 40% should be mobile and 32% should actually be moving forward (progressive motility) rather than simply vibrating in place. Only 4% of the sperm need to have the proper shape.1

What is sperm morphology?

Sperm morphology refers to the size and shape of sperm.

A normal sperm has an oval head 5µm (micrometres) by 3µm in size and a single tail 50µm long that enables it to swim with a wriggling motion.

Up to 10% of sperm produced can be described as "abnormal"; that is, they may have an observable defect which makes it difficult for them to fertilise the egg.2 Abnormal sperm may have a range of defects, such as an extra head or tail, an oversized head or a missing acrosome. If less than 4% of sperm produced have a normal morphology, this can be a cause of conception difficulties.1 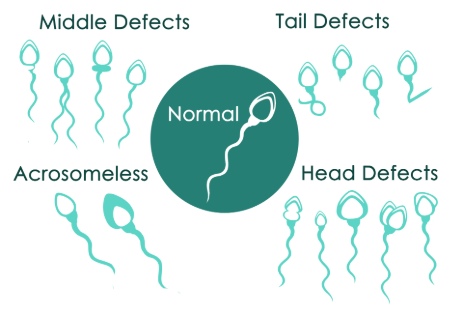 What is sperm motility?

Sperm motility is how well the sperm are able to move.

The sperm’s motility is low while in the seminal fluid, which is alkaline, but it becomes active inside the vagina, which is acidic. Each sperm must use its tail to ‘swim’ through the vagina, uterus and fallopian tubes to reach the egg. The tail then helps it to penetrate and fertilise the egg. A sperm needs to achieve a motility of at least 25µm per second to get through the cervical mucus.

According to the WHO, 40% of sperm should be motile and 32% should actually be moving forward rather than simply vibrating in place. A high proportion of sperm with poor motility can cause male infertility. 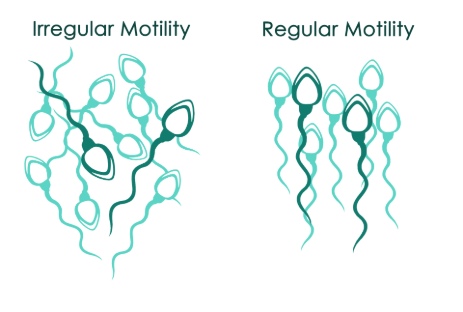 What is sperm concentration?

A typical male ejaculation consists of 3 to 5 millilitres of seminal fluid. Each millilitre should contain 15 million sperm but can contain as many as 300 million.

The chances of conception go up with higher sperm concentration.

What causes issues with sperm morphology, motility and concentration?

The production of healthy sperm is a complicated and delicate process. As you might expect, there is an extremely large range of factors that determine sperm quality and concentration.

A number of these factors are easily understood and some are even easy to address. For example, men who ejaculate frequently will have a lower sperm concentration. By abstaining for several days prior to sex they can increase concentration. Low sperm count can be caused by low testosterone levels, and the causes of low motility include damage to testicles, for example from an infection or an injury, improperly descended testicles and testicular cancer. There is also now evidence to suggest that men’s sperm quality decreases with age.

Other factors are difficult to pin down. For example, a study by the Jerusalem Hebrew University has shown that the sperm concentration of men in Western countries has dropped by more than 50% in 40 years.3 Similar results have been recorded in other wide-ranging studies, worldwide. We know that a fifth of young men in the UK now have a low sperm count.

Scientists aren't sure whether the decline is due to environmental factors, diet, or pollution. However, we do know that individual lifestyle choices can have a major impact on a man's sperm quality. Making the right choices can help in many cases.

How can I test my sperm health?

The best way to test your sperm count and quality is to book an appointment with your GP. Home testing kits are available, but the NHS advises that these kits only test for concentration, not for motility and quality. While these tests might sometimes give a useful indication of your sperm count, they may also give you false reassurance or may suggest your sperm count is low when it is actually normal.

If you're concerned about your fertility, it is better to see your GP for a proper semen analysis at an accredited laboratory.

How can I improve my sperm health?

To improve chances of conception, the NHS makes a number of lifestyle recommendations for men:4

Sperm morphology is more difficult to improve than sperm count or motility, but there are still specific steps you can take. For example, the amount of oxidative stress the body is under can affect sperm quality.

Oxidative stress is caused by free radicals, reactive molecules with unpaired electrons that can attack and change other substances within the body and cause damage to cells.

Although it may be normal to have a low level of free radicals, excess free radicals must be deactivated by antioxidants in the semen if sperm are to function normally. Damage from free radicals can affect the fluidity of cell membranes, affecting sperm motility as well as morphology. If the damage is severe enough, theoretically, it can even cause cell death, reducing the sperm count.

If a man’s sperm morphology, motility and concentration do not improve with treatment, doctors may offer IVF treatment in which one of his normal sperm is injected directly into the egg.

How long does it take to improve sperm health?

Sperm production is constantly taking place. In fact, a man will make about 1,500 sperm every second - several million per day.

However, sperm production is also a long process from beginning to end. The sperm must be created, must mature in the testicles and must finally be transferred ready for ejaculation. The complete sperm cycle take around 64 days. So improving sperm health is a long-term process.

Sperm are male reproductive cells that carry half of the genetic information needed to create a new life. In order for a man’s sperm to reliably fertilize a female reproductive cell called an egg he needs a healthy concentration of sperm with the proper form that are capable of 'swimming'.

There are a variety of causes for poor quality sperm. Some of these problems can be rectified medically, others through lifestyle changes such as quitting smoking or eating a good diet. Improving sperm quality through these methods can take a long time.