We wanted to find out whether attitudes have changed towards our own health and immune system since lockdown began and what effect this has had on our personal relationships.

The results of our research are fascinating; the good news is that many of us are now turning to exercise and good nutrition to support our immune health.

However, millions of us are avoiding members of our own family and friends who don’t stick to the coronavirus rules on social distancing and hand washing.

A massive 85 percent of us would think twice about meeting up with friends and family they suspect of not following the guidelines, and one in five have had a row over risky behaviour.

While relationships may be seeing some strain, there’s good news for the nation’s health. Compared to this time last year, two thirds (65 percent) of Brits have taken stock and now consider the state of their immune health much more seriously. Over a third (36 percent) have made changes to their behaviours and habits in order to strengthen their immune system – with 45 percent exercising more, 41 percent eating more fruit and veg with an additional 41 percent taking health supplements too. 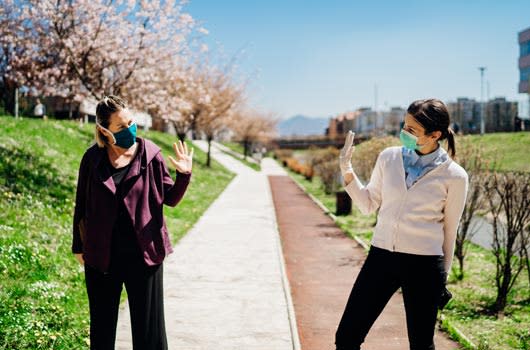 Londoners are the most likely to have made changes to their behaviour in order to actively strengthen their immune system (62% vs a national average of 36%).

Friends and family will also find themselves with fewer dates in the diary with over a third (38 percent) saying they would challenge friends and family on any behaviour that they disagreed with such as not wearing masks – with 1 in 5 even having rows with people over a difference in attitudes.

Millennial Brits are even more likely to challenge friends and family with almost half (46 percent) saying they would fall out with someone. Over a quarter (28 percent) are also prepared to lock horns with their social circle if they were to find out they were not following government guidelines.

Hugging and shaking hands between family and friends has also fallen out of fashion since Corona came around with 48 percent saying they do much less of this – meaning hugging could soon just be a social norm of the past.

Family tensions are being stretched by differences in attitudes to staying safe and only half of us now hug and shake hands with our family and friends. However, it’s reassuring to learn that nearly two thirds of us are now taking more interest in our own physical health and the different ways to support our own immune health.

An online survey was conducted by Atomik Research among 2,002 adults aged 18+ from the UK. The research fieldwork took place on 27 August – 1 September, 2020.