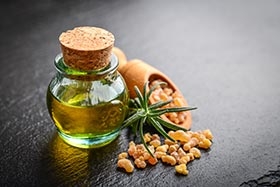 Indian Frankincense has a long history in traditional medicine and religion. Today, it is used for supplements, perfumer and aromatherapy, and is known to be a natural anti-inflammatory.

Boswellia Serrata is a hardy tree of the Boswellia genus, found in dry and rocky parts of the Indian Subcontinent. Like other trees in the genus, farmers make two-inch cuts into the bark two or three times a year to produce ‘tears’ of aromatic resin. This is known as Indian Frankincense.

The trade in Frankincense is at least 5,000 years old. The Old Testament talks about its role in religious ceremonies conducted at the Temple in Jerusalem, where it was burned on a special altar to produce a fragrant aroma.

Along with gold and myrrh, frankincense was one of three valuable gifts dedicated to the gods and kings of the ancient world. This partly explains why the wise men presented frankincense to Jesus in the Christian nativity story.

Frankincense has also been used in traditional Indian (Ayurvedic), Arab, African and Chinese medicine as a remedy for chronic inflammatory conditions such as arthritis. Today, it is used to create supplements and perfumes, and in aromatherapy.

Frankincense consists of essential oils, polysaccharides and resin. The essential oils are responsible for the pleasant aroma, while the resin contains boswellic acids that form the main pharmacologically active component.

Inflammation is caused by the body’s immune system. It occurs when the white blood cells attempt to fight off foreign organisms, usually in response to irritation, injury or infection. When a person has an autoimmune disease such as rheumatoid arthritis, the immune system triggers inflammation when there is no invader to fight. This can cause swelling, pain, joint stiffness and tissue damage.

There are four major boswellic acids in Indian Frankincense. These have been shown to inhibit the enzymes that cause inflammation. Of the four, 3-O-acetyl-11-keto-β-boswellic acid (AKBA) is the most important, as research shows that it is effective against inflammation related to conditions like arthritis, bronchial asthma, chronic colitis, ulcerative colitis and Crohn’s disease.

As with other active ingredients, boswellic acids are only effective if they can be properly absorbed by the body. A highly bioavailable supplement allows for significant absorption of boswellic acids.